What is in a name??? – How does a plant name influence you? 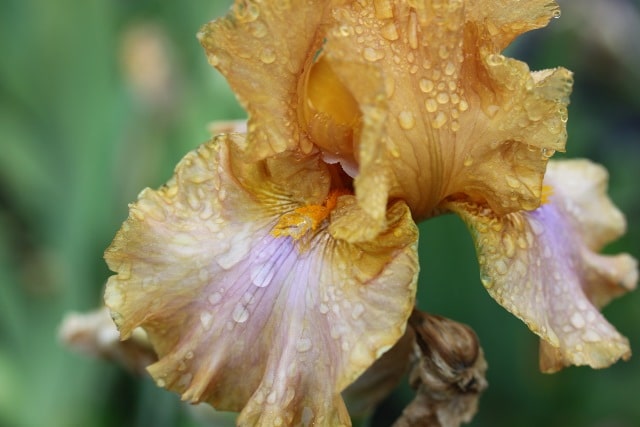 General background introduction
The purpose of this article is to consider the importance you give to the name of plants and if that name has any influence or attraction to you. The question to you is whether you are more likely to buy a plant because of its name (and this includes knowledge you may have about its provenance) rather than other factors such as colour, time of flowering etc.

This article also considers how plants are given their names and a brief consideration of the approach adopted by three important Kent based breeders (hybridisers) of new iris varieties over the last few decades. I hope you find this of interest. 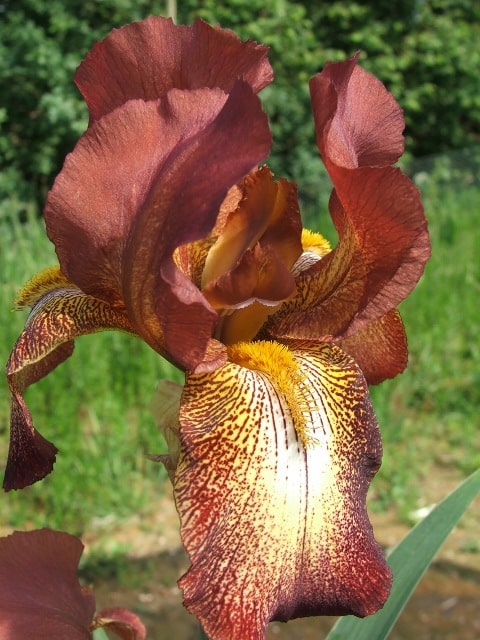 The traditional focus on buying plants
When you visit a garden open to the public or even a garden nursery are you, like me, always eager to know the name of a plant or shrub which attracts your interest? It is often insufficient just to recognise the plant, there is a need to know its name and any details of the plant which can be stored in the memory for future reference. It is particularly exciting, when visiting a garden open to the public, to spot the galvanised sign (more likely plastic signage these days) which gives you the Latin description and the name of the variety in place. It is even more exciting when the plant is in flower and you can take a photograph, preferably with its signage in focus. The idea at the time is that you will be able to track down that variety and be able to acquire it for your own garden.

In the case of the iris family there is a rich history over the last 100 years plus of development of the iris in terms of colours, texture and forms. This has meant that there are now thousands of individually named varieties that have been registered, some but not all, have become commercially available and can been seen in public and private gardens as well as plant nurseries. However only a relatively small number are actually readily available for sale and of more importance, continue to be available over an extended period of time.

There are of course some named bearded and non-bearded iris that retain their popularity over a long period of time and as a result continue to be commercially viable. These individual varieties are grown in large numbers in “trade” nurseries in the United Kingdom and Europe. The majority of these plants are now sold in general nurseries but are no longer grown on site but rather imported for sale in this way. This is why so few different varieties are available in general nurseries. 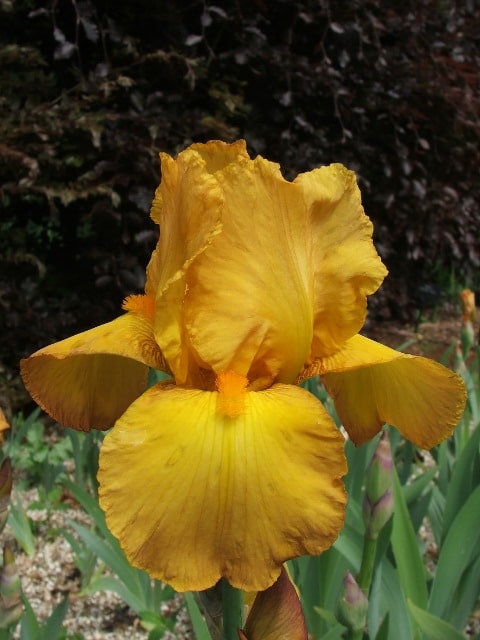 The name of the plant becomes important
The naming of a particular plant, and, for this article the focus is on the iris family, does create interest and discussion. For example if a variety is named after a person, who was that person and what was their relationship to the person who has cultivated that plant. Such information is often not readily available but it creates interest and almost certainly gives the plant a bit of personality. 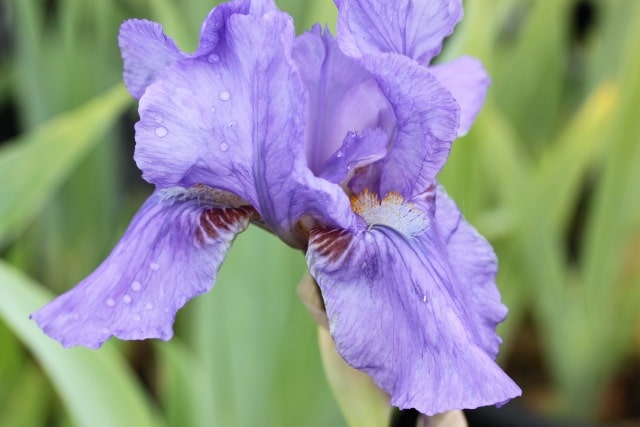 If a plant is named after a place or event it then attracts interest from those of us because we have some sort of link with that place/location. In the case of the county of Kent a number of iris have been named after the county. Examples include ‘Kent Pride’, ‘Lord Warden‘ (after the Cinque Ports), ‘Cliffs of Dover’ and many others. In the case of ‘Kent Pride’ this was bred in this county in the 1950s and is always popular when on show or available for sale in the county of Kent.
It is, of course, possible that the name of the plant may discourage interest. For example the iris ‘Cigarillo’ is a beautiful tall bearded iris but its name, which is associated with tobacco (its colour is strongly associated with nicotine) can cause rejection. It is also true to say that English sounding names (and this includes North American names) are more popular than plant names from countries where there is no obvious understanding of its meaning. 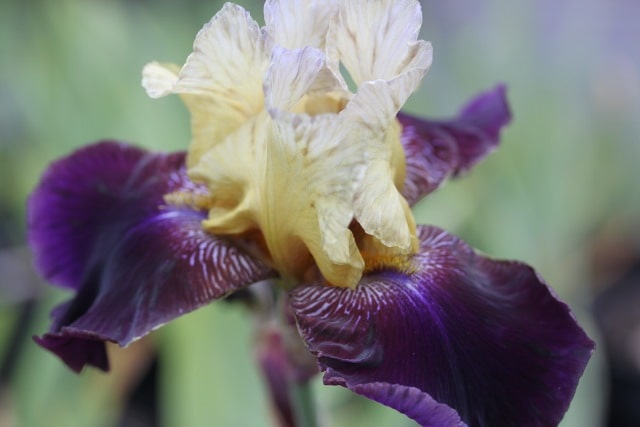 The growing interest in the collection of plants
The majority of gardeners tend to select plants based on the how they will fit into their existing garden layout, a bit like a piece of jigsaw fitting into the puzzle. However some gardeners will be tempted to buy a plant not only because it’s the right jigsaw piece but because they have some attraction to the name or history. The increasing interest in historic collections of plants is a good indicator of this focus towards selecting plants because of factors such as the name, the breeder of the plant, where it was grown etc. The growth in the number of national collections in the UK confirms this interest. However the subject of historic collections, particularly as it relates to the iris family, is for another day. 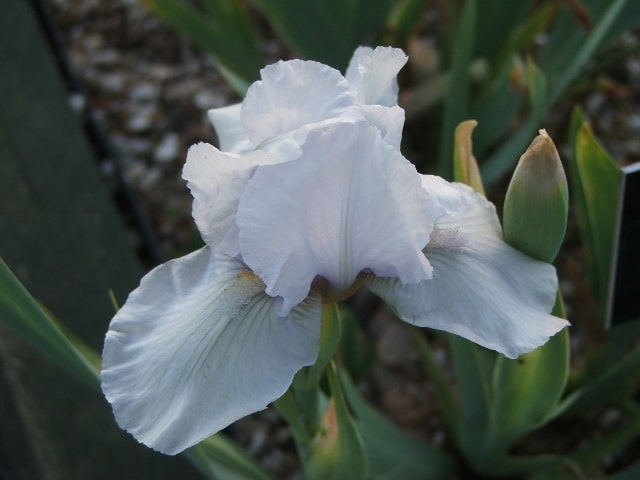 The formal naming process
In the United Kingdom the British Iris Society is responsible for administering the naming process for all new varieties of iris. Anyone can put forward a new variety to be named. There are no restrictions on that person in terms of knowledge or experience. In other words the naming of a plant is not the sole preserve of professional plant growers. In the case of the United Kingdom it is normally amateur breeders who dominate the production of world class iris.
When you apply to register an iris you need to consider the following: 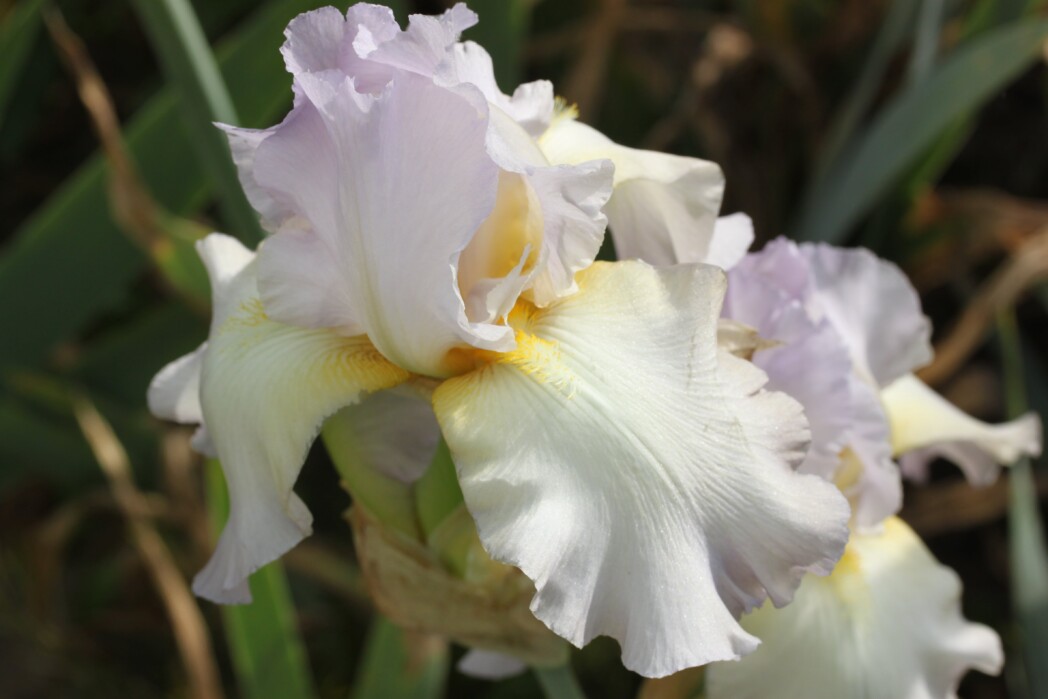 The approach adopted by iris breeders in the United Kingdom
During the last three decades the county of Kent has been one of the key centres for the development of new varieties of iris. It is not a coincidence that three people in particular have made a significant contribution to the introduction of new iris. All three have lived within the west of the county around the Maidstone area. It is planned in the future to write detailed articles on each of these people but for the purposes of this item I will restrict comments to the approach they have adopted in the naming of their varieties. I have below summarised their approach 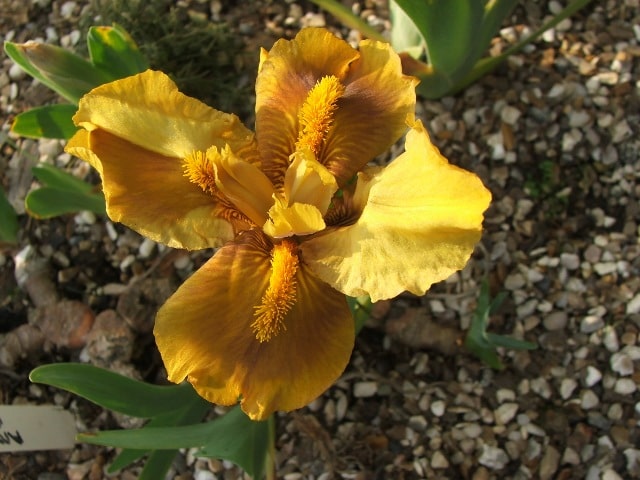 Thelma Naylor
Thelma is famous for growing dwarf (short) bearded iris. She is credited with a number of RHS AGM awards for her iris. The AGM is the highest award granted for a variety and is only awarded after exposure to rigorous trials over a three year period. Thelma adopted a straightforward and easily recognisable “signature” for her plants. The first part of the name was always Amherst. This was the name of the road where she lived. The second part of the name involved either

Thelma was highly admired for the quality of her introductions and the majority of her plants are to be part of a national collection on Kent irises within the next couple of years.

Brian Hersey
Brian is famous for growing a wide range of iris, bearded and non-bearded varieties with a particular interest in pollinating historic varieties with more modern forms to obtain the best of the old and the new. He has adopted a very personal approach to naming his new varieties although he has occasionally considered commercially attractive names.
The majority of his naming has however focused on family or personal experience with no particular reference to the colour or form of the iris. Some of his iris names are shown below: 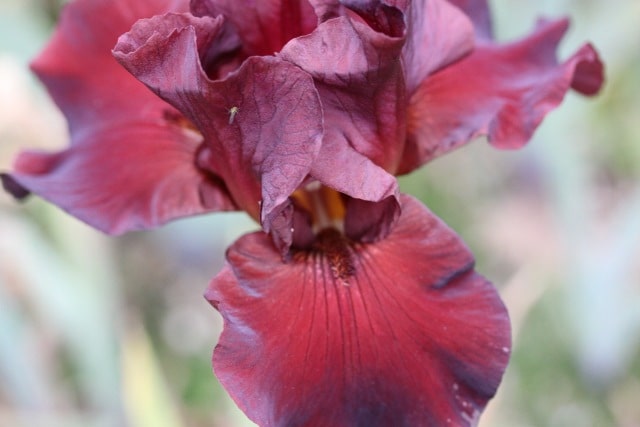 Olga Wells is a nationally significant figure in the iris world. She is well known both in Europe and the United States and has a very impressive record for producing world beating iris. However Olga is again a true amateur but with a professional approach to hybridisation. Whilst able to produce both bearded and non-bearded iris her world wide reputation is very much with miniature tall bearded iris (also known as table iris) and other forms of bearded iris. As with both Thelma Naylor and Brian Hersey many of her named varieties have both personal links, ie family names as well as Kentish name associations. Olga has tended to use the terms Invicta, Wealden or Kent to highlight the county link in some of her varieties. Some of these are again shown below; 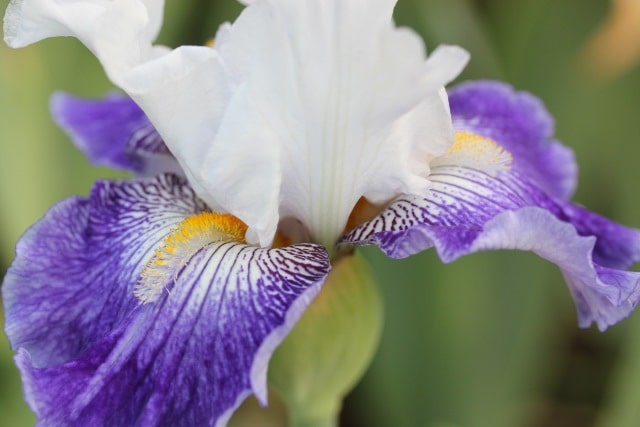 Summary
I hope that the above brief article gives you food for thought. The subject is of course much more complex and does not attempt to consider the details of national collections (often really historic collections). The iris family has a number of national collections across the United Kingdom and it can be anticipated that this number will grow over the coming years.
Perhaps when you next look at plants for sale please consider if the name of the variety does have any influence on whether you purchase the plant.